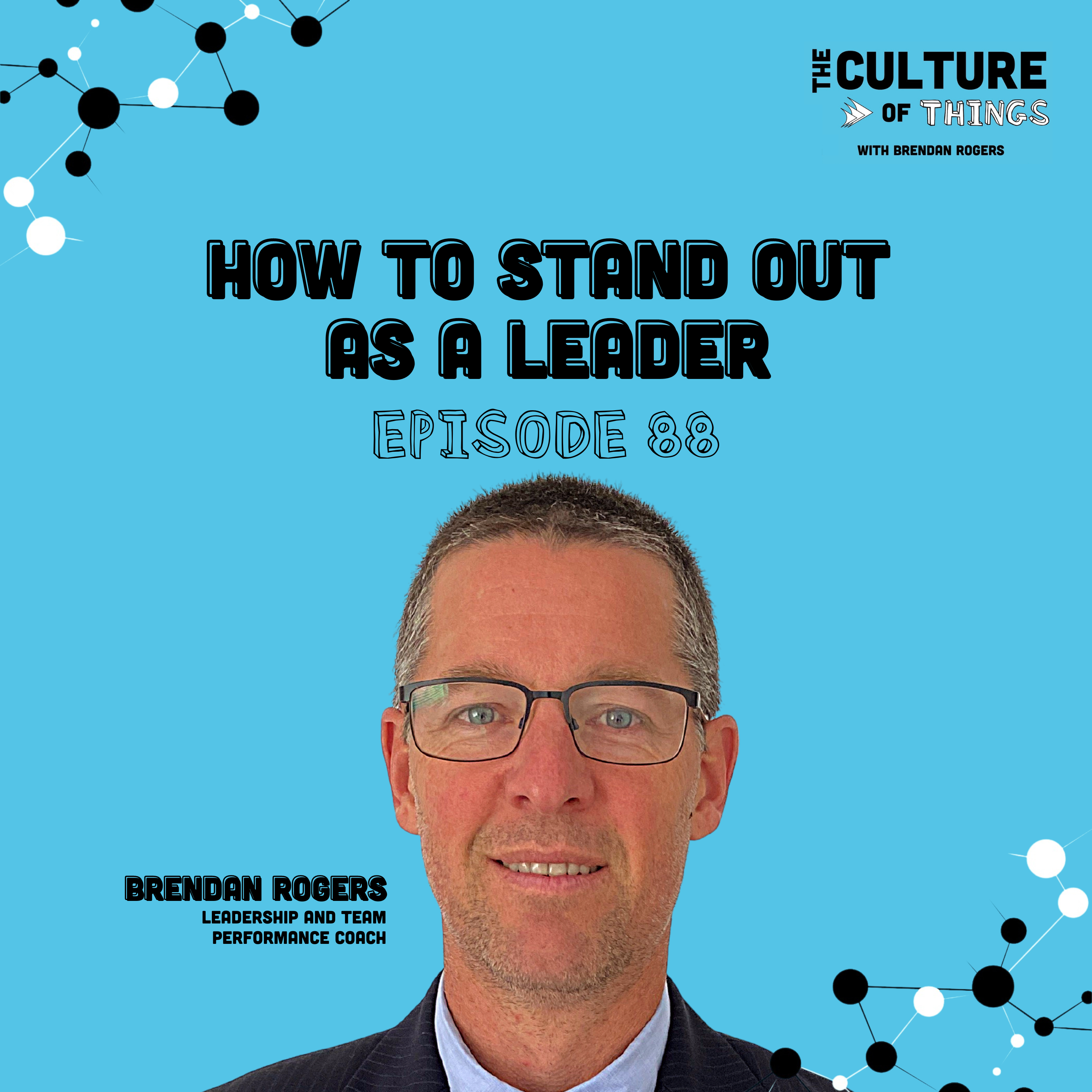 The Culture of Leadership
88. How to Stand Out as a Leader

In today’s episode, the tables are turned on host Brendan Rogers as he is interviewed by producer Marc Charette about the future of The Culture of Things podcast.  Brendan’s interviews so often center around the essentials of building leadership. It is this focus that is driving a pivot in the focus of the podcast.  In subsequent episodes, Brendan will be diving deeper into his “People System” which focuses on building great leaders. There are three key elements that drive 8 essentials of a successful business in this system, and today Marc and Brendan will touch on some of the basic tenets of the People System that will help people ‘stand out as leaders.’

Stay tuned for future episodes of the podcast which will now be entitled: The Culture of Leadership!

Lessons for emerging Leaders. It's a Hard Road when a Leaders Journey Begins. It's this journey and the lessons on it, which form the basis of my interview with Martin West. Martin, along with his co-author, Mark Bragg, recently released Hard Road, A Leader's Journey Begins. The book is a fictional story about a new leader's journey. It provides a 5 part model to help new and emerging leaders as they begin their leadership journey. Martin is a great friend of mine and mentor. He is the owner of a consultancy business called X-Gap, which focuses on helping Leaders create conversations that produce healthy team performance. We will be releasing this interview in two parts over the next two weeks. The focus of my two part conversation with Martin is his new book and the lessons for emerging leaders. In Lessons for Emerging Leaders: Part 1, Martin shares his experience in the air force, and how it helped him find his passion and transition into his consultancy business. He shares the background to the book, and we dive into the first and most critical part of the 5 leadership challenges for emerging Leaders. Enjoy part 1 of my chat with Martin. [caption id="attachment_1308" align="aligncenter" width="1024"] Martin West (left) & Mark Bragg (right)[/caption]   If you have any questions for Brendan around this episode or ... 78. One Mind, Many Matters (Strength & Resilience)

Barnaby Howarth has faced more than his share of tragic experiences in life. From being diagnosed with diabetes at 14, to suffering a torn cerebral artery in a gang fight (and having a stroke 7 days later) to losing his first wife to breast cancer shortly after their honeymoon, to choosing to have his finger amputated because it was hindering his daily life, Barnaby has not had it easy.  But as he tells it, being an everyday “Joe Bag O’Doughnuts” IS enough, doing the best you can day to day IS enough.  Being a regular person who tries to put “small good” out in the world is all you have to do to live your best life. As a former AFL player for the Sydney Swans, the host of the “Everyday Greatness” podcast, and sought-after public speaker, Barnaby doesn’t just TELL an interesting story – he is living one. Discussion Points Why and how do you use the term “Joe Bag O’Doughnuts”? Some of Barnaby’s early stories around the AFL The gang fight and his friends– and subsequent stroke The tiny exercises that seemed ridiculous - moving paper clips and clenching buns The challenges Barnaby has to live with forever because of the stroke Good things/bad things happening to people has no logic Losing his first wife Angela to breast cancer How to move on after the loss What’s the buzz you get from public speaking? ...

54. Leadership in the Voluntary Sector

Today I’m talking with David Bacon - an experienced director, chief executive officer, and senior executive in both the private and public sectors. He is an expert communicator, stemming from his career in journalism and radio broadcasting. He shares a bit about the work he did as a spokesperson for British American Tobacco, noting that he was able to remain ethical and truthful throughout his time there - which is why he never felt the need to apologize for doing this job - regardless of the fact that most people had strong opinions about the company and the industry (which meant that he avoided talking about his job most of the time).  David is a highly intelligent, incredibly humble, and interesting individual. Our conversation is a rollercoaster ride of topics - which is pretty much reflective of David’s life and career. David has buckets of life experience and he shares about his enjoyment in being able to give back as a way to show his gratitude towards his career and- business success. To that end, David joined the Gosford Rotary club where he has achieved much as club president since then and while he has recently stepped down as president, he made sure to leave a legacy of strong leadership and good values behind. In today’s episode, we get to know David a bit better and find out what he believes is required to be successful in life.   Discussion Points Introduction to David Bacon Cash for comment scandal  David’s role in the regulation of the industry after the scandal About ...